Melissa Etheridge has had a pretty dramatic life in the last decade:  breast cancer and its remission; separation from her long-time partner and wife, Tammy Lynn Michaels; and two years of custody disputes over their children.  As it has always been with Etheridge, the personal has spilled heavily into the music.  2007 release The Awakening and its accompanying tour brought a new sense of spirituality to her work, and was far more of a cohesive narrative than past albums.  2010’s Fearless Love saw a resurgence of traditional Etheridge sounds, albeit a little more mellow in places.

With her latest release, 4th Street Feeling, Etheridge is still the same folk-rocker, and yet, she’s not.  Describing the album as having come from a sense of inner confidence and a desire to immerse in the recording process to the utmost, funk and roots slip in between the cracks of an album that is as confessional and self-reflective as ever, but perhaps more playful and nostalgic.

Read on as OTM gives the album a spin and sees how it measures up alongside her prolific catalogue. 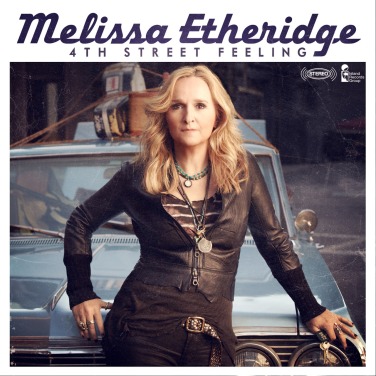 Kansas City:  Opener “Kansas City” launches with a riff that reminds of the bluesier rock of the late 60’s.  Dealing out lyrics about Tic Tacs and “mom’s amphetamines“, the song firmly plants the listener into a walk down the memory lane of Etheridge’s youth.  While it’s not a bad song per se, it feels out of place at this junction in her career.  This is a song that one might have expected on her first three albums.  It also could fit well within the “life I lived” narrative of The Awakening (it certainly reminds of “An Unexpected Rain” at times).  The lyrically weak chorus brings the song down, unfortunately.  Good, but she’s done better.

4th Street Feeling:  Title track again evokes a retro soul sound.  So far, this album is to Etheridge what Back To Basics was for Christina Aguilera’s catalogue.  A classic tale of wanting to not only go home, but go back to a moment in time when life was simpler (in hindsight), it’s a plaintive number that blends the new sonic elements with the familiar melancholy confessional of her past work.

Falling Up:  Here we hit the single, a jaunty bluegrassy tune.  This track is the most “typical” Melissa on the album to this point, with its wry tongue-in-cheek salute to freedom and embracing one’s flaws in style.  Optimistic and brimming with positivity on the tail end of lessons learned.  “Here’s to me.  Oh, let’s raise a cup.  I am fancy free and I’m falling, falling up.”  The jammed bridge is particularly fun, as is the overall loose feel to the song structure.  Oh dear God, she did just call out, “Shake it like a Polaroid“…

Shout Now:  Gritty blues rock number, with the sense of a dingy bar confessional.  “I’m gonna shout ’til the devil gets on his knees,” Etheridge growls, and you believe her, without question.  A mix of anger and release, with a hip-shake riff running throughout.  The belted vocals evoke earlier work and maybe a dash of her Janis Joplin cover.

The Shadow Of A Black Crow:  Rich in metaphor and the darkness of truths concealed and held within, this could easily be a tidied up lost track from her debut album.  Think “Bring Me Some Water”.  I have a feeling this will be amazing live, allowed to roam free.  “He’s been on my tail for close to three days.  Just a little souvenir of my wicked ways.  I would rather die fast than to ever live slow.  Father forgive me for what my mother don’t know…”

Be Real:  If this is Etheridge trying to evoke the sass of Aretha Franklin, she needs to stop.  Her own natural ‘voice’ is sufficiently strong; why take on a persona?  How ironic, in a song condemning people who construct false masks.  “Me, I like the natural thing.”  Me too,Melissa.  Not liking this one much, aside from the bluesy grit and hand claps of the instrumental elements.

A Disaster:  Oh good:  Melissa’s own voice is back on this one.  Completely out of place on this album, this tune’s much more like her standard slow, moody compositions.  There’s a little funky key work on this, but otherwise, the flavour is completely different.  Lyrically, this one seems to be a flip off at her ex, Tammy.  “Say goodbye to the best of me and call it a disaster… Move on, move on.  I’m just another casualty.”

Sympathy:  Standard Etheridge in attendance here:  rocking folk-blues, snarky sass lyrics that poke holes in a facade.  In this case, she’s on the attack over people who play the victim even as they tear others apart.  That notion of “everyone’s had a bad life, so deal” is a tried and true rock song staple.  Etheridge’s version is pretty solid, though.

Enough Rain:  Even as Etheridge claims that asking for sympathy is too much in the preceding song, here we find her in a somber mood, urging someone to shake off the “rain” and come back into the sun.  The struggle to reach into that emotional darkness and shine a light is well depicted here.  One of the better tracks on the album.  “The sky will stop bleeding, just like the pain.  Haven’t you had enough rain?“

Scared Heart:  The opening riff reminds me of an old tune I can’t quite name from the 70’s prog scene… Feel free to message me if you think of it.  In any case, the strange prog-funk of this tune again feels out of place and is a jarring sonic shift.  There’s a lighter waving sway to the chorus melody line.  There’s a sense of shaking off shackles and mistakes of the past here, but the angel imagery that creeps in here and throughout a lot of her work is getting grating.  In some ways, this feels like a regurgitation of The Awakening.

I Can Wait:  A primarily acoustic, slow ballad professing devotion and patience, this is Melissa as she’s best known.  She’s written this song before though, so while it’s a nice number, it’s not a standout by any means.

Rock And Roll Me:  Again, I’m feeling that Aretha Franklin soul vibe in the slow-fast, stop-start melody and the plea for her lover to “rock and roll me… I want to be your one and only.”  Meant to be sultry and seductive, it kind of comes off cheesy.  I’m not a fan of most of Etheridge’s “mushy” songs, to be honest.  Pained love, sassy love…. those, I like.  But just as I kind of roll my eyes at “Threesome”, I’m rolling my eyes at this one.  What a lousy closer to this album, and very obviously about her new partner.

Final Comments:  In exploring new sonic landscapes, I commend Etheridge.  After a career as long as hers, it’s healthy and refreshing to expand horizons without losing the core building blocks.  4th Street Feeling definitely evokes a sense of nostalgic past, connecting with the album title’s reference to the main drag of her home town.  Playing all of the guitars on the album is a new challenge taken on with gusto, and is mostly a success.

However, the album, in all its playing around, loses a sense of cohesion.  Several tracks feel completely out of place, disrupting the flow of the work.  Further, the Kings Of Leon influence is a little too noticeable, as is the cribbing from classic soul tracks.  While expanding one’s palette, one must be careful to be influenced by, but not duplicate.  Etheridge doesn’t quite succeed here and the album suffers for it.

Is it worth a listen for fans?  Certainly.  I would caution them to take it as an experiment, and to expect to feel very strongly about tracks – either positively or negatively.  When this direction works, it works very, very well.  When it doesn’t…  well, the album ends on two clunkers.  Enough said.

Highlights:  Falling Up, Shout Now, The Shadow Of A Black Crow; Enough Rain

Lowlights:  Be Real; I Can Wait; Rock And Roll Me