No one can ever accuse Sunday Lane of resting on her laurels.  Hot on the heels of the release of her first full-length release, From Where You Are (read OTM’s glowing review here, if you haven’t already), Lane is hard at work nurturing Fauntella Crow, a new project with Jessy Greene, as well as touring with Thick As Thieves.  With each project having its own flavour, Lane’s proving that she is both gifted and diverse in her sonic exploration.

Taking time out of her hectic schedule, Sunday Lane was gracious enough to answer a few questions for OTM.  Read on to learn more about the role of television in launching artists, dreaded classical lessons and how “A Little Too Young” almost never saw the proverbial light of day. 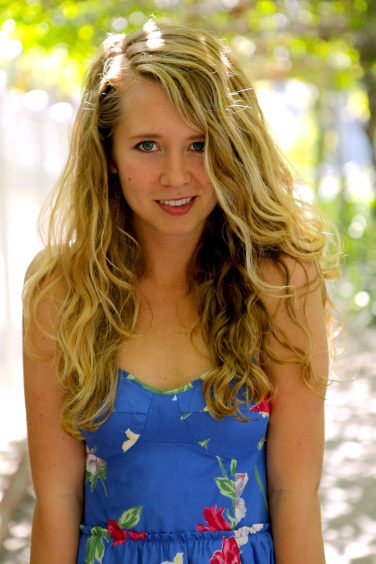 OTM:  Congratulations on the release of your first full-length album, From Where You Are! How are you feeling, now that it’s out in the world?

SL:  Thank you! It’s a great feeling. With my EP, we recorded the whole thing in basically a weekend. I had nothing to prove and just wanted to see if anyone would actually listen. I approached recording this album much differently. These songs all mean a lot to me, and we took our time getting them right.

Take us back: when and how did you first become interested in creating your own music? Which came first: the classical piano training or the desire to write songs?

I started classical lessons when I was 5 and absolutely hated it. Thanks to my parents, I stuck with it and started writing songs around 15. Nothing has felt more natural in my life. I absolutely love writing music.

Even between the release of your EP debut Bring Me Sunshine and From Where You Are, your songwriting has continued to develop and become more refined, an incredible feat for a young artist. Looking back at your first creations years ago, how has your work evolved?

Thank you! I’ve had the privilege of working with some great writers since my EP, one of them being Allan Rich. He really challenged me to make these songs the best they could be. I used to write a song and think, “Yep, that’s it. That’s what came to my head first so that’s what I’m sticking with!” Now, I go back and make sure that my lyrics are really saying what I want them to say. However, at the end of the day, my favorite songs are the songs that are simple, raw, and beautiful. I don’t over-think songwriting.

One of the songs that immediately resonated with me was “A Little Too Young”. How did that song come to be?

Honestly? I was taking a shower and it just popped in my head and I started singing it. I thought it was kinda cheesy and was going to just forget about it, but luckily my friend was in the other room and heard me singing it and convinced me to finish it. We were in a hurry ’cause our buddy was picking us up to go to a movie, so I sat at a little keyboard in the apartment and wrote the song in about 8 minutes while she sat on the couch behind me. Each phrase I’d turn around and ask, “Is that cool? Should I keep that?” *laughs* It’s not always that rushed, but it just flowed easily that time.

Can you tell us a little about a few of the other songs on the album (your choice – go ahead and play favourites)?

My favorite to listen to is “Light Up.” My favorite to sing is “Waltzing With Fire.” And the one that means the most to me is a toss up between “Slowly” and “Want You Back.”

In all honesty, my favorite song will always be my most recent one, so there’s been a few favorites since the album!

In addition to your solo releases, you’re also in the band Thick As Thieves and now Fauntella Crow as well! How do you juggle the requirements of three different musical entities, each with their own vibe? (Do you ever sleep?)

Ha! Yes, as much as I can! As a musician, and person really, I never want to feel boxed in. I like all different kinds of music, and I have the desire to create lots of different music, so being in a couple bands has been awesome. I do keep really busy, but I wouldn’t have it any other way.

Your songs have already found a place on television on One Tree Hill. Would you be interested in composing explicitly for film or television at some point down the line?

I think that would be awesome. That’s definitely something I’ve considered for the future.

The music industry – specifically, its business model – has been in a state of flux for some time, and continues to be. As an artist, how do you feel about the business end of things? What’s working? What isn’t working?

Every business is tough, but starting a business is particularly tough. As a musician that’s what we do. It’s been strange for me having to transition back and forth from being creative and loving what I do, but also wanting to make this my career. The music business is struggling, but when it comes down to it, I believe that there will always be a market for music. TV has played a huge role in helping unknown artists like myself reach listeners across the world. I have people on Twitter asking me to come to play shows in Ireland. There’s no way that would have been possible without my One Tree Hill synch. Touring is another away to attack it. Thick as Thieves has had a lot of success playing college shows through NACA. I’m sure there’s lots of ways go about this, but at the core of it is perseverance and hard work. Nothing within me doubts that this will be a tough road, but I can’t imagine doing anything else and I’m excited for the journey.

Who inspires or fascinates you right now, as an artist?

Bon Iver. He’s a genius melodically and lyrically. I got to see him this summer and he’s incredible live as well. I definitely cried. *laugh*

Dream artist(s) to share a stage with for a tour?

Within the Thick As Thieves realm, you’ve created several remixes and smashups of popular songs. If you could select anyone to take a shot at remixing one of your own creations, who would it be and what song would you like to see remixed?

I’d love to hear Bon Iver do “Slowly” or Randy Travis do a country version of “Get To You.”

I trust in the opinions of artists I enjoy, so tell me: what five songs do you consider “essential listening” for a music lover?

The world is ending in ten minutes. You can choose one song to play during that time. What song do you choose?

What’s next for Sunday Lane?

Well, hopefully Bon Iver will read this and take me on tour with him!

I’ve got a lot of Thick As Thieves shows coming up all over the nation this year. Within the next month alone we’re playing in Ohio, Kentucky, Maryland, New Jersey, Kansas, New Mexico, and other places that I’m sure I’m forgetting. I’m also doing a couple solo shows in Oklahoma September 18th and 20th and I’m sure I’ll play in LA sometime in October. Besides that, lots of writing! Always writing. *smiles*

Thanks so much, Sunday Lane!  OTM eagerly awaits a tour stop in Toronto with any of your projects!

OTM highly recommends From Where You Are and also suggests you download the free Thick As Thieves EP and sample Fauntella Crow.