I have to preface this entry by noting that, as a first taste of the annual Toronto Jazz Festival, the shows I was privileged to see were outstanding.  The diversity of artists on the bill and the generation-spanning appeal of artists like Janelle Monae is an asset that I hope the festival capitalizes on next year.

In this post, I take a look at one hell of a one-two punch combo show:  the powerful pipes and humble warmth of Joan Osborne and the wise-cracking and ridiculously talented Matt Andersen. 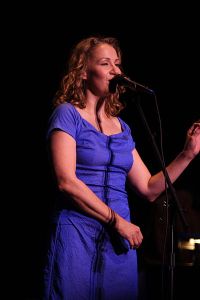 If you were alive and remotely aware of the popular music charts in 1995, you know Joan Osborne’s name.  Her debut major label release Relish brought with it mega-hit “One Of Us”, a bluesy-rock-pop piece contemplating the possibility of God walking among the everyday citizens and the struggle to maintain faith.  With three Grammy nominations hot on the heels of its release, Joan seemed poise to soar.

Happily, in her mind, she retreated to a comfortable level of fame instead.

To only know that hit tune is to not know Joan Osborne’s work at all.  Evolving from a heavy background in blues and soul music, Osborne’s future albums delved deeper into that love.  Her latest album, Bring It On Home, is a collection of vintage blues and soul covers, and it is with that full circle audiences found themselves during her mainstage performance.

Opening with a new tune (“This Is Where We Start”), Joan quickly introduced herself and the other half of her duo, the talented Keith Cotton, stating that the set was a mix of “whatever I feel like playing”.  With a relaxed confidence of a performer truly at home on stage, Osborne belted her way through old classics (Billie Holiday’s “God Bless The Child”; Jimmy Ruffin’s “What Becomes Of The Brokenhearted”), well-selected covers, new material and old singles for the nostalgic fans (“St. Teresa” and the aforementioned “One Of Us”, performed in a beautiful piano-driven incarnation that brought the crowd to its feet).

What made the show particularly stellar – aside from Osborne’s pipes, of course – was the acoustic duo take on songs traditionally performed with a more robust full-band approach.  It breathed new life into the material and truly allowed the vocals to shine.  Covers were delivered with lighthearted banter explaining their significance.  The story of Osborne’s time with The Dead and how her favourite song never made the setlist led to an audience member shouting, “Play it now!” to which Osborne coyly said, “Oh?  Play it now?  What a good idea!” (it was already planned, of course).  Original tune “Spider Web” was one of the highlights of the set, with its jumping melody and sassy sensibility.

The fact that audiences were able to applaud and cheer their way into an encore says it all:  Joan Osborne – with full band or in a duo – is not to be missed.

This Is Where We Start
St. Teresa
Work on Me
Brokedown Palace
Spider Web
Tupelo Honey [Van Morrison]
I’m Qualified [Clarence Carter]
Champagne and Wine [Otis Redding]
One Of Us
What Becomes Of The Brokenhearted [Jimmy Ruffin] 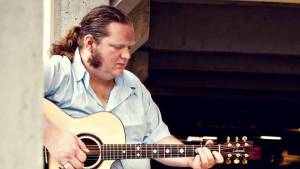 “Cmon down TO folk. I’ve seen JO and she is killer…..and you’ll get to see me flip my hair.”

Matt Andersen’s invitational tweet for his Jazz festival set is but a taste of the tongue-in-cheek and quip-filled banter you can expect during a show.  With debut album One Size Never Fits, Andersen quickly established the ability to deliver the honest self-reflection of the Delta Blues with a little twist of East Coast affability thrown in.  The result:  astonishing guitar work accompanying powerful vocals and lyrics that cut through the core of any listener.

Andersen’s set was at times heartbreaking, at others rolicking and often laughter-imducing.  His musical beginnings in classic rock shine through in uptempo melodies, giving the traditional blues foundation a modern feel, while his vocals filled the mainstage tent with a robust earnestness that one couldn’t help but connect with.  Andersen comes with no pretension (although he is gifted enough to earn a little); instead, he evokes the sense of a really awesome party, where everyone sings along and trades stories until the wee hours.  Songs like “Devil’s Bride” tell a story we’ve all lived, either as the wronged lover or the friend watching from the sidelines (or the bar stool, as Andersen suggests).  “Feel Like Going Home” captures the melancholia of life and the desire to seek familiar surroundings in times of turmoil.

Having grown up on my dad’s collections of blues and the likes of Buddy Guy, Taj Mahal, Muddy Waters and Eric Clapton, Andersen does the greats proud and perhaps creates a bridge between the rich tapestry of traditional blues and the new generation of easily distracted music consumers.   Memorable and thoroughly entertaining (I will never forget the image of a badger and raccoon frolicking down a street to “Round and Round”), Matt Andersen is a treasure of a Canadian performer, one who’s sure to continue making his mark in the music history books.